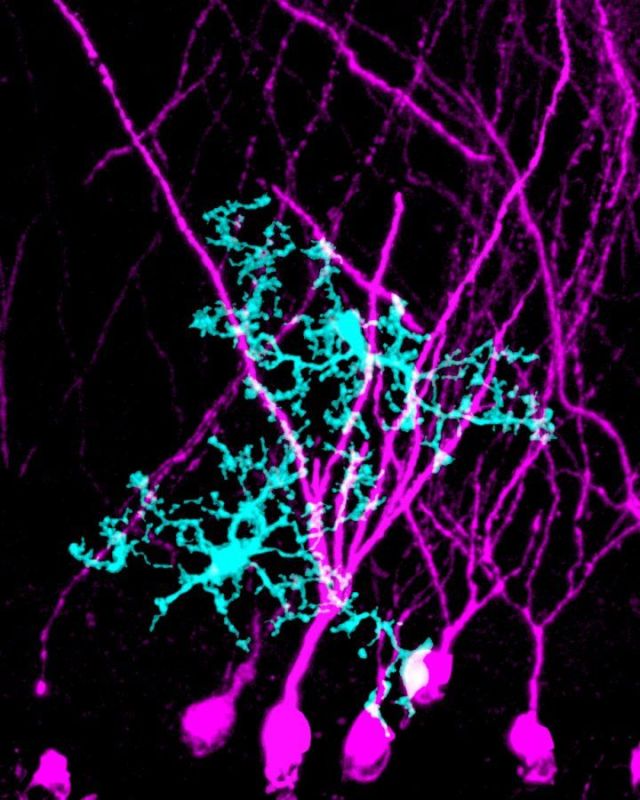 To make new memories, our brain cells first must find one another. Small protrusions that bud out from the ends of neurons’ long, branching tentacles dock neurons together so they can talk. These ports of cellular chatter – called synapses, and found in the trillions throughout the brain – allow us to represent new knowledge.

But scientists are still learning just how these connections form in response to new experiences and information. Now, a study by scientists in the UCSF Weill Institute for Neurosciences has identified a surprising new way that the brain’s immune cells help out.

In recent years, scientists have discovered that the brain’s dedicated immune cells, called microglia, can help get rid of unnecessary connections between neurons, perhaps by engulfing synapses and breaking them down. But the new study, published July 1, 2020, in Cell, finds microglia can also do the opposite – making way for new synapses to form by chomping away at the dense web of proteins between cells, clearing a space so neurons can find one another. Continuing to study this new role for microglia might eventually lead to new therapeutic targets in certain memory disorders, the researchers say.

Neurons live within a gelatinous mesh of proteins and other molecules that help to maintain the three-dimensional structure of the brain. This scaffolding, collectively called the extracellular matrix (ECM), has long been an afterthought in neuroscience. For decades, researchers focused on neurons, and, more recently, the cells that support them, have largely considered the ECM unimportant.

But neurobiologists are starting to realize that the ECM, which makes up about 20 percent of the brain, actually plays a role in important processes like learning and memory.[…]

Director of Manchester School of Samba at http://www.sambaman.org.uk
View all posts by agogo22 →
This entry was posted in Science and tagged construction, Environment, nature, science. Bookmark the permalink.