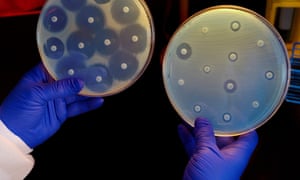 The culture plate on the right has bacteria that is resistant to all of the antibiotics tested. Photograph: Science History Images/Alamy

A powerful antibiotic that kills some of the most dangerous drug-resistant bacteria in the world has been discovered using artificial intelligence.

The drug works in a different way to existing antibacterials and is the first of its kind to be found by setting AI loose on vast digital libraries of pharmaceutical compounds.

Tests showed that the drug wiped out a range of antibiotic-resistant strains of bacteria, including Acinetobacter baumannii and Enterobacteriaceae, two of the three high-priority pathogens that the World Health Organization ranks as “critical” for new antibiotics to target.

“In terms of antibiotic discovery, this is absolutely a first,” said Regina Barzilay, a senior researcher on the project and specialist in machine learning at Massachusetts Institute of Technology (MIT).

“I think this is one of the more powerful antibiotics that has been discovered to date,” added James Collins, a bioengineer on the team at MIT. “It has remarkable activity against a broad range of antibiotic-resistant pathogens.”

Antibiotic resistance arises when bacteria mutate and evolve to sidestep the mechanisms that antimicrobial drugs use to kill them. Without new antibiotics to tackle resistance, 10 million lives around the world could be at risk each year from infections by 2050, the Cameron government’s O’Neill report warned.

To find new antibiotics, the researchers first trained a “deep learning” algorithm to identify the sorts of molecules that kill bacteria. To do this, they fed the program information on the atomic and molecular features of nearly 2,500 drugs and natural compounds, and how well or not the substance blocked the growth of the bug E coli.[…]

Director of Manchester School of Samba at http://www.sambaman.org.uk
View all posts by agogo22 →
This entry was posted in health and tagged comparison, nature, science, technology. Bookmark the permalink.