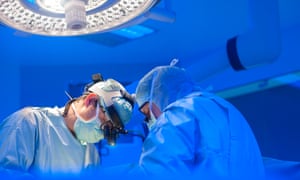 Adapted pig hearts could be transplanted into patients within three years, accordingto a report citing the surgeon who pioneered heart transplantation in the UK.

On the 40th anniversary of the first successful heart transplant, Sir Terence English told The Sunday Telegraph that his protege from that operation would try to replace a human kidney with a pig’s this year.

“If the result of xenotransplantation is satisfactory with porcine kidneys to humans, then it is likely that hearts would be used with good effects in humans within a few years,” the 87-year-old said. “If it works with a kidney, it will work with a heart. That will transform the issue.”

The anatomy and physiology of a pig’s heart is similar to that of a human’s, so they are used as models for developing new treatments. Hopes for a successful heart attack treatment were raised in May after a genetic therapy showed promise in pigs.[…]

Director of Manchester School of Samba at http://www.sambaman.org.uk
View all posts by agogo22 →
This entry was posted in Science and tagged comparison, medicine, science. Bookmark the permalink.