the book is on the table

In The Hitchhikers Guide To The Galaxy the Vogons are described as being:

“one of the most unpleasant races in the galaxy. Not actually evil, but bad-tempered, bureaucratic, officious, and callous. They wouldn’t even lift a finger to save their own grandmothers from the ravenous Bug-Blatter Beast of Traal without orders signed in triplicate, sent in, sent back, lost, found, queried, subjected to public inquiry, lost again, and finally buried in soft peat for three months and recycled as firelighter.” 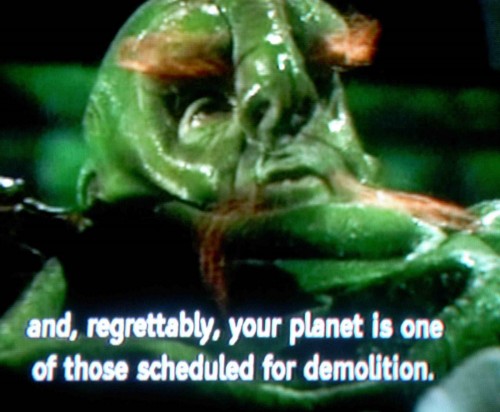 I often thought, having been frustrated by them both professionally and personally down the years, that this was an apt characterisation for the persistently inept UK Home Office*.

However, a ‘Google’ of Vogons and bureaucracy reveals that there are a lot of like-minded people around the world comparing their own governments to our poetically challenged friends from the planet Vogsphere. Clearly, the Guide needs to be updated.